Nevada’s sex workers are among the unemployed after brothels and strip clubs shut down due to coronavirus concerns.

“It’s like any business – it’s going to make a mark,” said legal sex worker Sandi Benks of the closure’s financial impact. “You work so hard when you’re an independent contractor, and it’s just on hold. It’s just bizarre.”

On March 18, Nevada Gov. Steve Sisolak announced the closure of all non-essential businesses, including bars and strip clubs, and the directive was expanded the following day to include the state’s brothels.

According to a 2012 University of Las Vegas report prepared for the Nevada legislature, there were 12,000 registered strippers in the city alone. Because sex work is not a state-regulated industry, there is no official statewide data on the number of legal sex workers in Nevada.

Benks said she left the Love Ranch in Mound House several days before the brothel closed because of coronavirus concerns.

“I had a gut feeling and I just packed up and left,” she said. “I bailed on it. I wasn’t comfortable. I knew nationally we weren’t supposed to be in groups over 10 and I was like this is a group over 10 – I’m outta here. I’m a stickler on that. I’d rather play safe than sorry.” 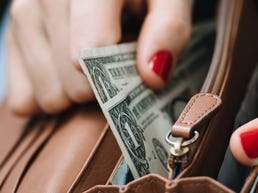 Benks said that even before the closure, she had clients cancelling, and one canceled because he suspected he’d been exposed to the virus.

“It was already affecting me in my head,” she said. “When there’s a pandemic, you want to be smart about it.”

She said she is considering using her fan base to market hand-crafted items on Etsy, as well as offering a virtual girlfriend experience.

“I have a lot of regulars who would like to support me through this time, but can’t,” she said.

All her income as a sex worker is contractually required to go through the brothels, she said.

And, as an independent contractor, she doesn’t pay into state unemployment, according to Rosa Mendez, public information officer for the Nevada Department of Employment, Rehabilitation and Training. On Friday, Mendez said that meant they would not be eligible for state relief.

However, the CARES Act passed that same day now allows independent contractors to receive unemployment, said Chuck Muth with Nevada Brothel Association on Wednesday. He added the process and system won’t be set up for a couple more days.

According to the University of Las Vegas report, the brothel industry brought in between $35 million and $50 million that year, and served about 400,000 clients.

During the brothel closures, sex worker Alice Little said she will focus on marketing her brand and working as a social media influencer.

“I do have friends in the independent world, and I’ll tell you, ladies are pulling back by and large right now,” she said. “Sex workers as a whole are participating in social distancing.”

Abby Avery, a former public-school teacher who switched to a career as a sex worker two years ago, said she can’t envision online camming for herself.

“I don’t really see camming or doing anything like that as an option,” she said. “At this point my plan is to just kind of ride it out and see how long everything is shut down.

“There are women who likely will turn to doing it illegally … I can’t imagine there wouldn’t be. But, I think first girls would resort to web camming and finding virtual ways to supplement their income.”

Melissa Holland, executive director for AWAKEN, a faith-based nonprofit organization out of Reno that works with human trafficking victims, said her group is aiming to help displaced sex workers during the coronavirus closure. But, Holland said AWAKEN had only contacted workers at the Reno Men’s Club, a local strip joint, and had not reached out to any of the state’s brothel workers.

Both Little and Benks said they would not approach AWAKEN for financial help.

“It will be, ‘Renounce your old life … and embrace Jesus Christ to receive this financial benefit.’ How about ‘No,’” Little said. “How dare they now pretend, ‘Oh, now we care for you.’ No, you don’t.”

Sex worker Imogen Steel, a New Zealand native who came to Nevada specifically to work as a sex worker, has been holed up at the Sagebrush Brothel in Mound House since the closure of the brothels, waiting for them to reopen.

She’s hoped the brothels re-open in April, the original projected opening date for non-essential businesses. Yet on Wednesday, Gov. Sisolak extended a statewide business shutdown through April 30and ordered Nevadans to stay at home to slow the spread of the coronavirus.